MusicBrainz along with the Picard tagger is without a doubt the best way to organize and manage large collections of music. The tagger will fingerprint audio files and automatically correct their metadata and filenames. 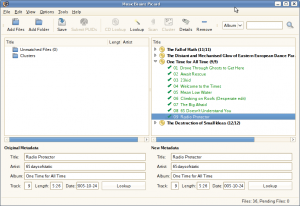 I’ve been using MusicBrainz since 2005, and even attempted to write my own tagger for it in Java back when Picard didn’t exist. When I switched to OpenSolaris, it was one of the programs I missed the most. So I went about building a package for it.

Unfortunately, the software has a lot of complicated dependencies such as Qt and FFmpeg which aren’t included in OpenSolaris either. FFmpeg I can understand; it infringes on countless software patents <insert rant here>. But Qt? There’s no reason for that. It is easily the second most popular graphics toolkit for Unix. Sure, the Solaris KDE guys have a build of it, but it installs to a non-standard prefix and doesn’t include 64-bit libs. No thank you.

Anyway, the package and its dependencies are up on my package repository for b132 and later. You know the deal…pfexec pkg install picard. Spec files are, as always, available from my GitHub repository.

Now that I have a good start on the FFmpeg package, I’m going to keep working on it, adding support for more codecs and eventually build MPlayer so I can stop using this guy’s less-than-ideal build.

EDIT: Just FYI, in order to get nice antialiased fonts in Qt applications, I had to modify the fontconfig settings. This is not necessary for GTK+ applications because they get their settings from the gnome-appearance-properties dialog. So in ~/.fonts.conf add:

Other Qt appearance settings can be changed from the qtconfig dialog.