Specifically, should employees of University System of Maryland institutions participate in the State Retirement and Pension System (SRPS) or the Optional Retirement Program (ORP)? That was one of the questions I had to answer for myself as I prepare to start a new job at the University of Maryland. The SRPS is a defined-benefit pension plan and the ORP is a defined-contribution 401(a)-like plan. The default is the SPRS, and it seems like they do everything they can to steer you to it (I suspect because your contributions are how the State funds current retirees), but is it a better deal?

First, some details: the SRPS requires employees to contribute 7% of their salary to the plan. In return, after 10 years of service, you can retire at age 65 and receive a monthly allowance following this formula:

By contrast, the ORP is simple: the University will contribute a flat 7.25% of your salary to your choice of Fidelity or TIAA-CREF, and you can invest it however you want. The money is immediately vested. Additionally, you can take the 7% that you would have had to contribute to the SRPS and invest it on your own in a supplemental retirement plan or IRA. That’s a total of 14.25% of your salary going towards your retirement every year…comfortably within the 10-15% that experts recommend.

For me, considering it doesn’t vest until 10 years of service, the SRPS was right out. But as an experiment, I wanted to know which would be the better option if I worked for Maryland for 10 years. (The SRPS does allow you to withdraw your contributions compounded annually at 5% interest if you terminate employment before 10 years, but then you wouldn’t get the benefit of the State’s contribution to the plan, and you can almost certainly do better than 5% annually in the long-run by investing in a mix of stocks and bonds.)

I plugged in all of my numbers to the SRPS formula, and calculated an estimated withdraw rate for the ORP supposing a realistic inflation-adjusted growth rate. The results were clear: the ORP could provide me with about twice as much money during retirement. With results like those, I was curious whether the SRPS would be a good deal for anyone and under what circumstances that would be.

So I whipped up a little program to do the calculations for me. It has sliders for each of the input variables so the results can easily be compared for a wide variety of circumstances. The program works with your current salary and inflation-adjusted rates of return to give you a picture of what sort of spending power in today’s dollars you would have during retirement.

Consider a 35-year-old who makes $80,000 per year. If they expect to work for Maryland for 10 years and think they can earn around 5% in the market after adjusting for inflation (that’s a real annual return of 8% if you assume an average of 3% inflation), and intend to retire at 65 and expect to need income for 30 years in retirement, the ORP just barely comes out on top: 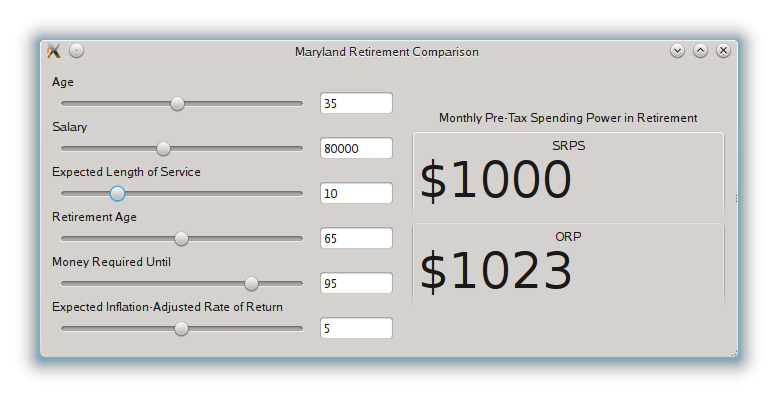 Indeed, that seems to be the turning point. Any older and you won’t have enough time to let those returns compound, and if you are any more risk-averse, then you won’t be able to generate the returns needed to outpace the pension system. In those cases, the SRPS would be a better choice for you, but only if you are in it for the long haul. You’d be wasting valuable investing time if you join the SRPS and leave before your contributions vest. Otherwise, read a book or two on investing, and do it yourself with the ORP.

But don’t take my word for it; do the math or put your numbers into my program and see what the better choice would be for you:

Of course, I make no guarantees that my program is accurate, but you can get the source code and check it out for yourself. Also consider investment risks and other factors such as plan benefits carefully.

This is a long post mostly so I can look back and remember what I did, but I’m posting it publicly in case anyone is in a similar position and could benefit from my research.

About a year ago I became eligible for my employer’s retirement plan, and at the time I was completely overwhelmed by this whole new world of mutual fund investments. Not only was I given a large selection of funds to choose from, but I was also given the choice of providers: Fidelity and TIAA-CREF. I did a little research, but couldn’t really decide what to do, so I just selected the defaults, Fidelity with the 2050 target fund, and let it sit.

Then, over the Thanksgiving weekend, I started reading the long-term investment thread at Something Awful where it quickly became apparent that (1.) choosing assets to invest in doesn’t have to be that hard, (2.) expense ratios (what a fund costs) matter a lot, and (3.) high-cost actively managed funds in general don’t perform better than their lower-cost index-based equivalents.

Then I remembered about TIAA-CREF. I pulled up a list of their offerings, and it made me a little more optimistic. Not only are their options cheaper overall, but they also have index funds available for more market segments. Really the worst thing that could be said after an initial look is that they could have more international representation, but it would turn out that, for me, it doesn’t really matter.

I started reading TIAA-CREF’s literature and taking their asset allocation (AA) quizzes, you know the ones. Well, considering I’m only 25 and I have a good 40 years until retirement, I would consider myself more willing to take on risk than someone a little older. Their quiz would have me put 86% into equities, 9% in real estate, and 5% in bonds. Why 9% real estate? Why not ten, or eight? And can 5% of your portfolio really affect anything?

At this point, I should note that TIAA’s Real Estate Account (TREA) is a unique investment vehicle among providers in that it invests directly in commercial real estate, rather than in companies that manage real estate as the more risky REIT funds do. There is really nothing else like it, and that made it hard to reconcile with other popular AA tips I found on the internet, such as having a simple three-fund portfolio. I wanted to know whether I should include real estate, if I should follow TIAA-CREF’s advice for AA, why they chose the numbers they did, and also why the Bogleheads advocate slightly more conservatives allocations. I may be young, but I don’t want to turn the risk up to 11 just because I can. I want managed risk that I can understand.

So I picked up a copy of The Intelligent Asset Allocator by William Bernstein, hoping it would shed some light on my questions. To be honest, I was hoping it would have The Answer in it, that it would point me to The Optimal Asset Allocation. Thankfully, it did a whole lot better than that. It stated in no uncertain terms that there is no such thing as an optimal asset allocation (except in retrospect), and anyone claiming to have one is conning you. The book started off by providing useful metrics for measuring the performance (in terms of annual return) and risk (in terms of standard deviation) of different asset classes. It was an easy, quick read that gave me a few techniques for understanding the behavior of different asset classes, and how they’ve historically interacted with each other in portfolios. Best of all, it gave me the confidence to tackle the same sort of research on my own.